Some people think that Moscow never sleeps. Some people even think that I never sleep, too. Sometimes I feel like I live (or at least sleep) in the rhythm of Moscow. Falling asleep in the dawn, getting off the bed between 9 and 10am, waking up at 11am, and finding myself ready for real stuff at in the midday. It's too bad Moscow is overly populated, otherwise it would be a very nice place to live.

Well, anyway it's completely unclear what you can do in the morning in Moscow. Most of Muscovites just felt asleep, and "the mafia" comes to game. "Mafia" of the cleaning workers, janitors and other people who make the city clean and comfortable. Cars are washing away dirt, chewing gum and garbage; street cleaners are obviously cleaning the streets... There's a life, but it's of no interest to me.

My way led me to VDNKh, and I found that Moscow is very nice during that time and in that place. It's clean and comfy. People are jogging in the streets, some are riding their bikes, skates and other devices :)

VDNKh has now the same name as it had during USSR times. However it's probably a lot different. I'm not sure, it's my first time at that magnificient place. But I believe they kept some old tradition while making things modern. For one, near the entrance you can find an invitation to seminar about being tolerant to other nations. And just a hundred meters away — and you're near the "Friendship of people" fountain (there're girls of many nations populating the USSR there, I can't even name them all). 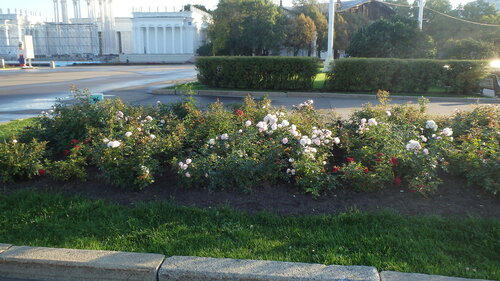 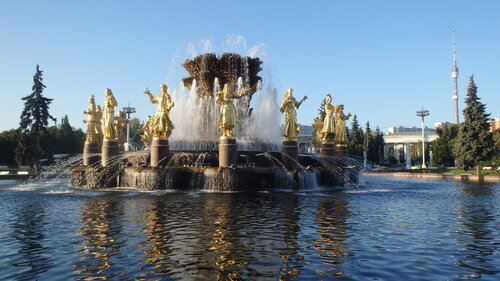 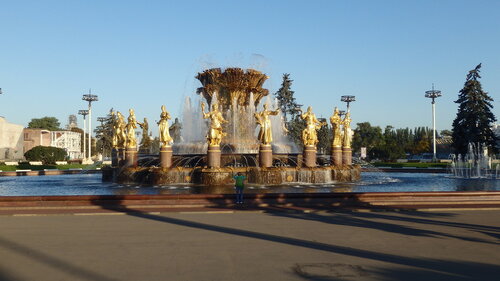 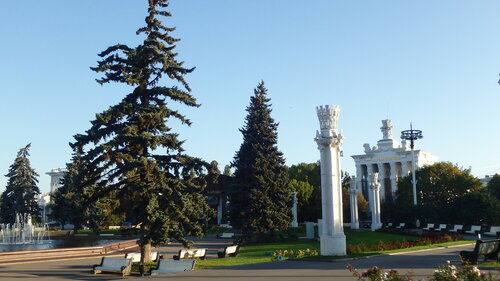 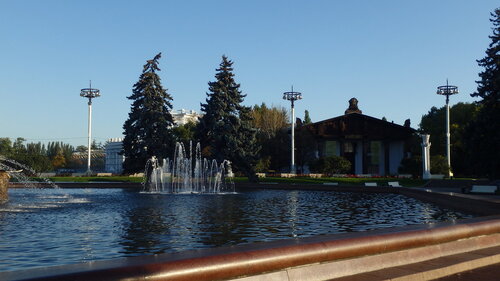 It's very nice that a lot of machinery is there, all available for free. There're helicopters, airplanes, missile-carrier, spaceship Buran (you can even enter inside, but that's not free). There's the biggest oceanarium of the Europe (well, who'd be surprised? Moscow has no access to the sea nor ocean, but it has biggest oceanarium). Team of the "Miniature Moscow" is working hard for it to become biggest miniature city in the world, and a lot of other interesting things. 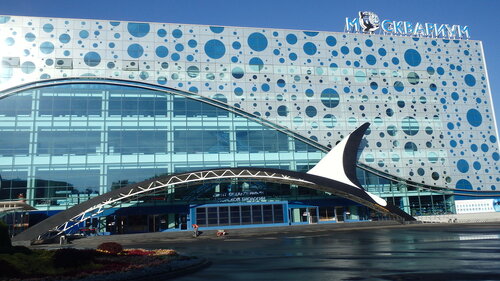 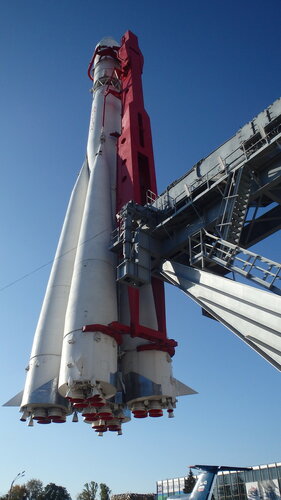 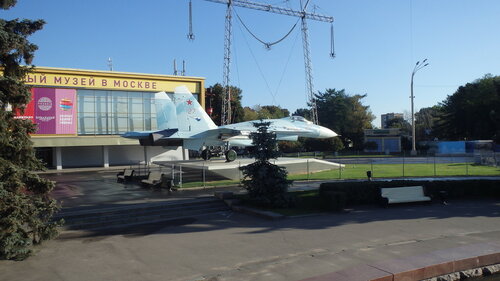 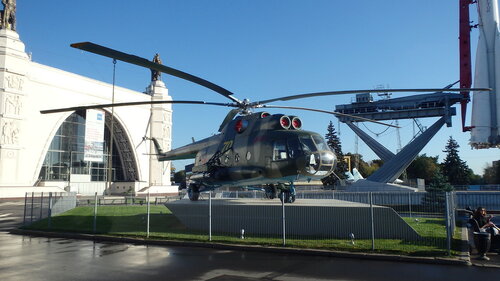 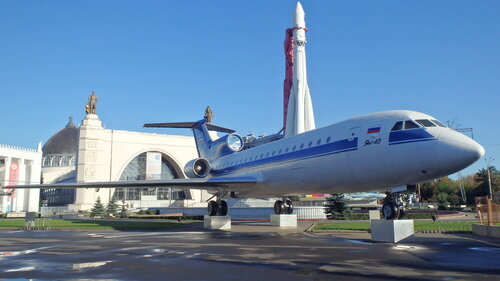 A funny story. I sat down on the bench and was browsing VDNKh website on my phone (There's free Wi-Fi, yay!). I was sitting in the middle of the bench and... one of the watering car machines washed everything near me, without making me wet. And then I moved on, and it came from another side, came directly to me... I was staring at the car... And it squeaked some sound and pushed crossed water streams. Again, without touching me. However, looks like I was an obstacle. A guy with a broom came, and... started to bring water to the central zone near me, thus finishing what watering car machine didn't finish yet. 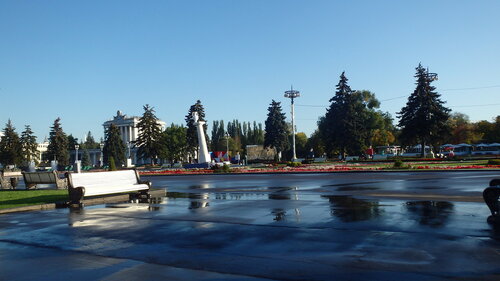 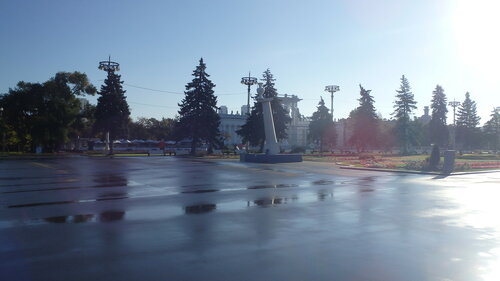 I had no clear plan what I'm going to see. Well, I was thinking it will be nice to see the greatest spaceship Buran. It would be nice and useful to visit some nice training or something. I was thinking it would be nice to see the Miniature Moscow. And people keep saying that visiting Oceanarium is a must. But there's too much of interesting places and I had only quite a bit of time. So, I had to decide, what to do next.

First of all, I walked down the territory. Well, some people are using bicycles, skates or other transport to commute, but I was walking with my own legs, and wasn't very tired after that. Yet. So, I had a preliminary plan: 9am: Miniature Moscow, 10am: hackspace training about 3d-printing, then Buran spaceship, then I yet had to decide, and then move to Mega to continue my business.

However, my plan was wrong. First of all, official webside had no working hours of Miniature Moscow, and third-party website lied me. So I had an extra hour to walk here and there and again and again. But I already purchased tickets to Buran (thanks you, mr. Mayor of Moscow, for providing us with the free Wi-Fi). Ok, then I decided to cut my hackspace time, and went to see the hackspace.

Surprisingly, the Steel hackspace had its own free Wi-Fi but it never worked. So I had to purchase the tickets over the 3G network (there's even no LTE in there). Outside there's a very ncie LTE though. 3D-printing guys weren't there so they offered me to watch the kids playing with battle quadrocopters. Well, actually at that moment they're trying to construct the quadrocopter out of the bunch of components. Later the guy said they're manufacturing these copters in Russia, and that looked weird: it's rather simple technics, so it will be better to use China, I suppose. Similar quality, but cheaper. However it's up to them to decide where to spend theirs money.

It was really boring, so I went to see the food tracks (they had an exhibition that day) and Buran. Inside the Buran. The tour was great! It's not actually the "genuine" Buran (genuine was lost). But the VDNKh's Buran is one of the prototypes (they're using prototypes to simulate bringing the Buran to the spaceport, to check it in extreme conditions and so on). A lot of stuff inside Buran is devoted to the people who made Buran possible: people standing behind the project. But the most important thing inside is the spirit of that time. Spirit of glory of our multi-national people. We were not the first: American shuttle did the same thing before. But still, only 2 nations were able to build that kind  of spaceship. 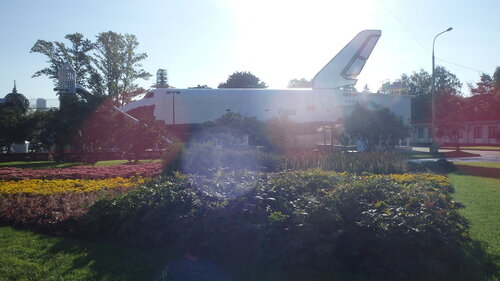 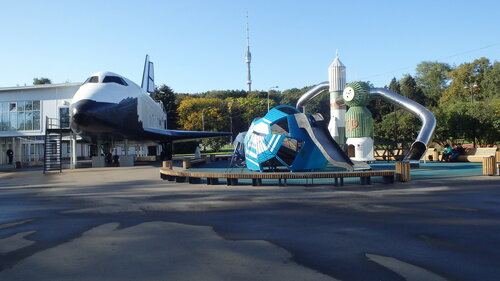 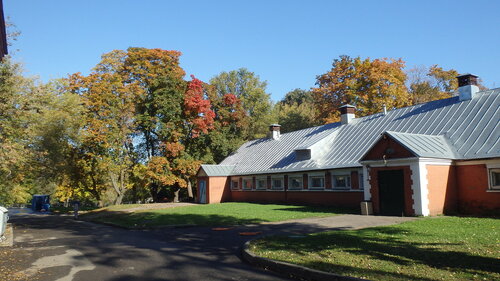 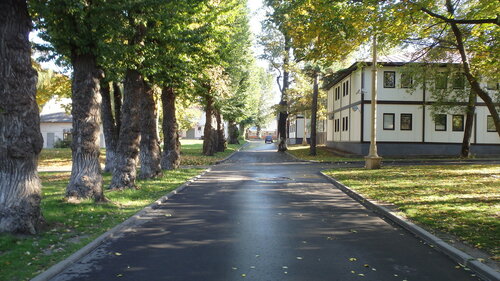 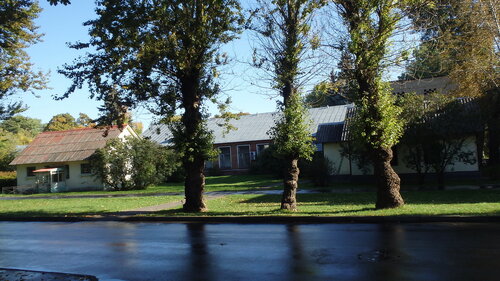 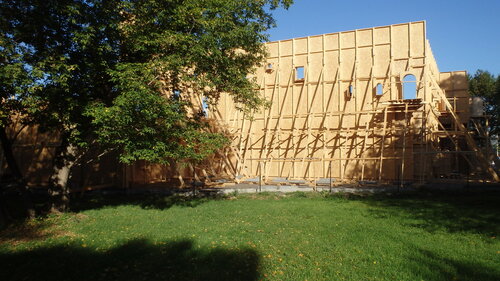 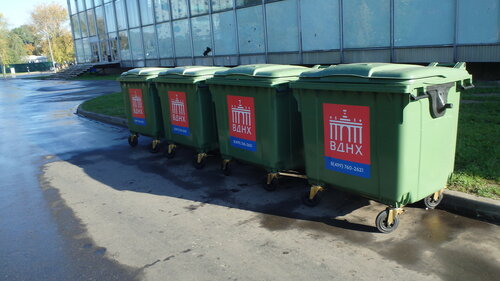 I can't tell you everything that's there in VDNKh. You can't just visit everything. And obviously you're not going to visit everything. For example, there're chess school and dancing school. I won't believe that people from the other side of Moscow will come here to learn how to dance. I won't believe people from USA or Japan will come here and study dancing as well. Or, the upside-down house. Or electrical bicicles and bikes rent. Or the exhibition "Exclusive Russian things", though I'd visit that if I had more time. 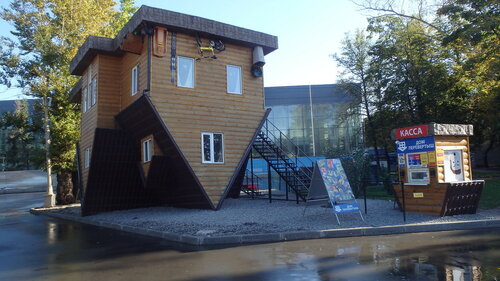 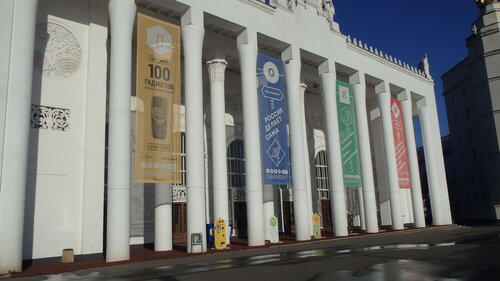 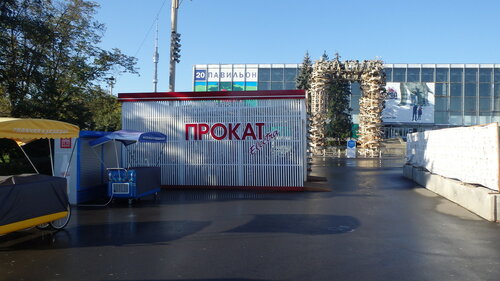 They had a foodtruck exhibition during that day. It's nice thing :-) If I was a cafe owner, I'd definitely consider opening that truck. If you know some Russian, check the signs on the trucks, they're very funny.

Uh, about food. I only ate fast-food during the day, but managed to lose some weight, thanks to the fact I was only able to sit down for 4 times: 1 short between 2 metro stations and 3 times during the fast-food eating :) 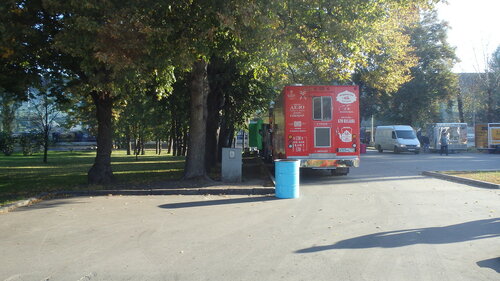 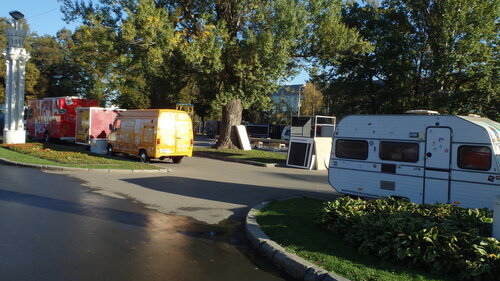 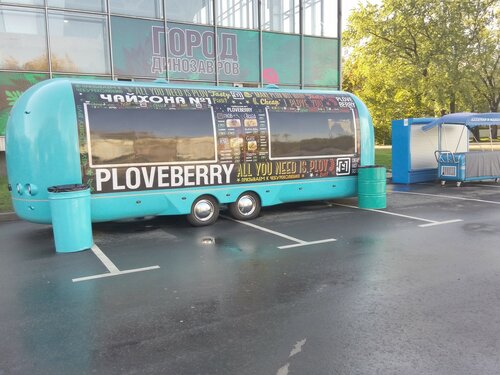 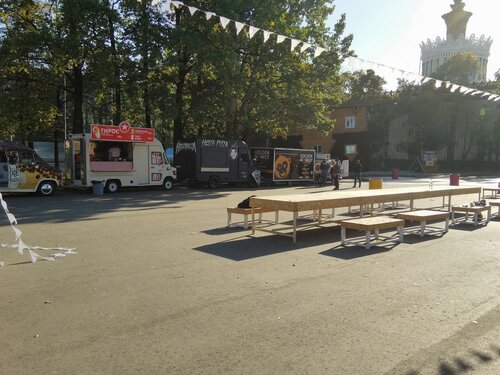 There's much more photos, but I'm not going to put more photos here anymore. I already spent more than a month to prepare this blog post. It's quite complicated to squeeze all of my thoughts about VDNKh in one short post. Just in case, the maid idea is: YOU need to visit VDNKh. You'll find something interesting in there, no doubts.